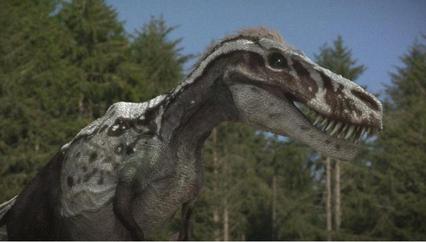 Nanotyrannus was a medium sized tyrannosaur. At 16 feet long and 1,000 pounds, it was much smaller than it's larger cousin Tyrannosaurus. Some scientists think Nanotyrannus is actually a juvenile Tyrannosaurus, but this is not universally accepted. It's long legs and smaller body suggest it could run fast, perhaps nearly 30 miles per hour. A contemporary of T-rex, Nanotyrannus would have lived in the shadow of it's bigger relative. It's been suggested that this predator hunted down juvenile Tyrannosaurus' to eliminate future competition because there is no way a Nanotyrannus could take on an adult T-rex. Nanotyrannus lived in North America 65 million years ago.