Abelisaurus was a large theropod dinosaur. It's only known from a partial skull, so its exact size is unknown. Abelisaurus is often estimated to be around 25-30 feet long and weighed roughly 1-2 tons. Like all abelisaurs, this dinosaur had tiny arms and a short, but powerful, skull. Abelisaurus would have hunted a variety of prey items like iguanodonts and small sauropods. Abelisaurus lived in South America around 80-85 million years ago. 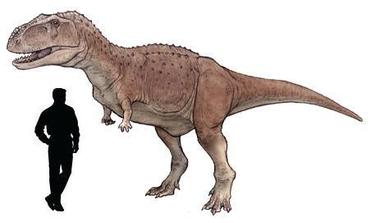