Miragaia was a strange European stegosaur. At around 16-20 feet in length and weighing over a ton, it was also quite large. Miragaia had a long neck compared to most stegosaurs. Along with it's longer than average neck, Miragaia was also covered in spines and plates. A large spike stuck out of each shoulder like those seen in other stegosaurs like Kentrosaurus. These menacing spines would've given attackers like Allosaurus second thoughts. Miragaia lived during the late Jurassic, roughly 150 million years ago. 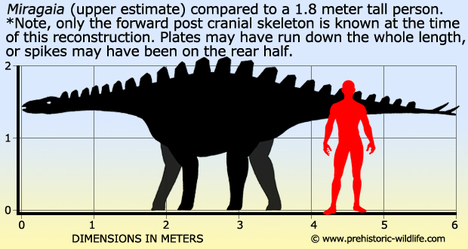