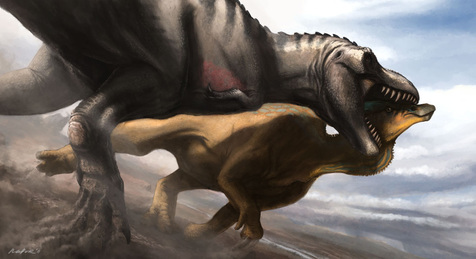 Tarbosaurus was second only in size to Tyrannosaurus rex in the tyrannosaur family. This predator reached an impressive size of 36-40 feet long and 5-6 tons. Tarbosaurus was the largest predator that ever stalked Asia, although it would have had to compete with it's cousin Zhuchengtyrannus. Some scientists consider it a species of Tyrannosaurus, but this is not universally excepted. Tarbosaurus lived about 75 million years ago.