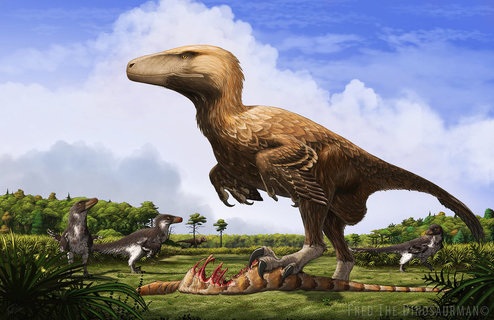 Only recently discovered and named, Dakotaraptor represents one of the largest dromaeosaurs in the world. Fossils indicate this animal was between 16 and 20 feet in length and likely weighed over 300-400 pounds. Living alongside it were many famous dinosaurs such as T.rex and Triceratops. After T.rex, Dakotaraptor was the largest predator in the area. Despite being comparable in size to juvenile tyrannosaurs, the two likely had different hunting strategies. The two likely did not compete very much. Whether or not Dakotaraptor was a pack hunter is unknown. These raptors stalked western North America around 66 million years ago.