One of the smallest dinosaurs known, Bambiraptor was only about 3 feet long and weighed less than 6 pounds. Like it's much larger cousin Velociraptor, this dinosaur had a sickle shaped claw on the second digit of each foot. It also had a covering of primitive feathers. Bambiraptor lived about 90 million years ago in North America. 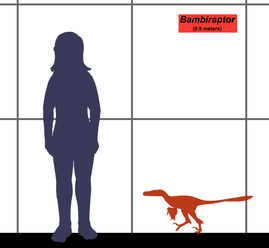