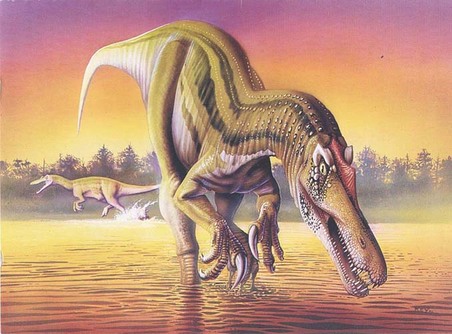 The first evidence of Baryonyx was a large claw over a foot long. The whole animal is over 25 feet long and just under 2 tons. This dinosaur likely ate fish and carrion. The skeleton of Baryonyx was found with Iguanodon bones in it's stomach. Many use this as evidence to back up the claim that spinosaurs hunted large dinosaurs as well. However, the Baryonyx may have simply scavenged this Iguanodon and did not kill it. It may have preyed on other dinosaurs, but this would have been a rare occasion. Baryonyx lived 130 million years ago in Europe.