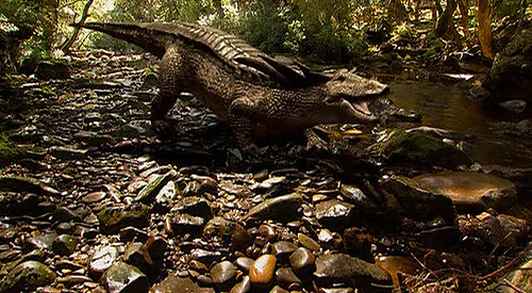 Desmatosuchus was a large reptile from the late Triassic. Though it looked fierce, this animal was actually a vegetarian. Adults were quite big, reaching some 15 feet in length and weighing over half a ton. The spikes on it's shoulders were a foot and a half long and for good reason. Carnivores like Postosuchus and Rutiodon were present alongside Desmatosuchus. Though it looked like a dinosaur, Desmatosuchus was actually just a relative of the dinosaurs. Like dinosaurs, it was an archosaur. It did however bear a striking resemblance to the later ankylosaurs. Desmatosuchus lived 210-230 million years ago in North America.